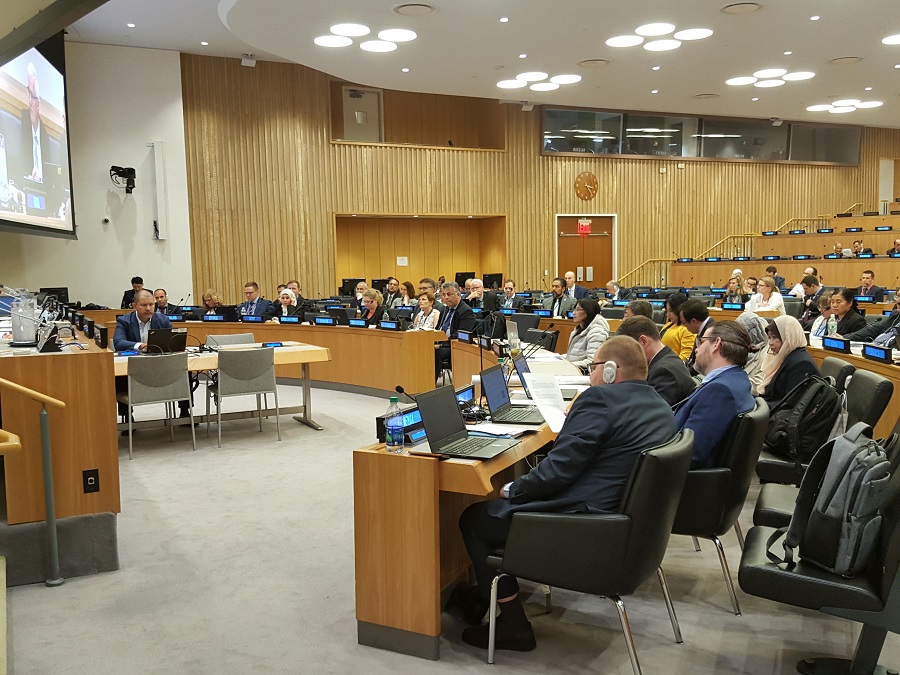 Fig. 1. During the UNGEGN Assembly.

The 1st Session of UNGEGN (United Nations Group of Experts on Geographical Names) was held in New York from 29 April to 3 May 2019 at the United Nations headquarters. The session was attended by many of the about 250 representatives of 61 state members, and  by 2 members of International scientific organizations (ICA, International Cartographic Association and IGU, International Geographical Union).  Representatives of member states are collected in 24 geographic / linguistic divisions, while the two scientific organizations are grouped together in the ICA-IGU Joint Commission on Toponymy. The decisions taken were: 1. Issues of publicity for the Group of Experts on Publicity and Funding, 2. Activities on national standardizazion in Africa (Task Team for Africa); 3. Toponymic Education (Working Group on Training Courses in Toponymy. Welcomed the announcement of two training courses in toponymy by Indonesia and the request for a training course to be held in the Caribbean region by Jamaica and encouraged further exploration of possibilities. These courses proposed at the time by Peter Raper and followed with interest by some countries, such as Brazil and Italy, present some implementation difficulties, both due to lack of funds and to the search for employment prospects. 3. Activities Relating to the Working Group on Toponymic Terminology. The Working Group is encouraged to continue to addressing proposal for changes and additions to the database of toponymic terminology. 4. Geographical names as culture, heritage and identity, including indigenous, minority and regional languages and multilingual issues.  The Working Group is coordinated by Annette C. Torensjö, who held a very well-attended meeting, with interesting discussions.

It should be noted that often the names of cities, regions and streets are not always recognized by the population for their cultural value. I give some examples for Rome. The Termini Station does not have the meaning of term, end, but of baths. Often the meaning of Piazza dei Cinquecento, or of Via dell’Amba Aradam, etc. is not understood. 5. Exonyms. On the very successful meeting of the Working Group the coordinator Kohei Watanabe presented a very detailed report, which I transcribe below. 6. Toponymic data files and gazetteers coordinated by Pier-Giorgio Zaccheddu convener of the homonymous Working Group. The Group of Experts expressed appreciation for the information available and the interventions in the plenary session. Observed that most activities in the countries focused on the establishment of National geographical names databases, services and applications to provide geographical names data for a variety of purposes, e.g., land management, health, emergency and other services. Recognized technological methods. Noted that the developments are in line with the UNCSGN recommendations of better integration of geographical names into national and regional spatial data infrastructures. 7. Writing systems and pronunciation. The conveners of the Working Group on Romanization Systems, Peeter Pll and Catherine Cheetham encouraged the member states that do not have a national Romanization system to liaise with the Workimg Group on Romanization Systems to create an approved system. 8. Cooperation with the United Nations Documentation Division. The Group of Experts encouraged the establishment of a communication channel between the Group of Experts and the United Nations Documentation Division in order to facilitate the exchange of information on the appropriate use of geographical names.

During the session the following special presentations have been discussed:

(b)   “Indigenous Issues and Cultural Heritage” delivered at the 7th meeting by the representative of the Permanent Forum on Indigenous Issues. The presenter responded to questions and comments presented by some Divisions.

(d)   meeting by the representatives from the Red Cross Red Crescent Climate Centre and the International Research Institute for Climate and Society. The presenter responded to questions and comments presented by some Divisions.

Cooperation and liaison with other organizations.

The Group of Experts noted the reports submitted by the liaison officers of the International Council of Onomastic Sciences (ICOS), Joint International Cartographic Association/International Geographical Union (ICA/IGU) Commission on Toponymy and the International Hydrographic Organization, as well as by the Committee of Experts on Global Geospatial Information Management (UN-GGIM) recognized that it is important to maintain the relationship between UNGEGN and the organizations with which it has liaison.

During the Assembly there was the change of the Chair William Hughes Watt, South Australian Department of Planning, Transport and Infrastructure. Chair of the Permanent Committee on Place Names, retired, with the new Chair Mr. Pierre Jaillard, President of the National Commission of Toponymy (CNT) French National Council of geographic information (CNIG).

During the Session 20 events took place. I have already mentioned the Working Group on Geographical Names as Cultural Heritage coordinated by Annette Torensjö. I would like to refer to the Presentation of the Joint ICA / IGU Commission on Toponymy coordinated by Peter Jordan, ICA Chair of the ICA-IGU Commission on Toponymy. The Working Group has been attended by many people. Peter Jordan illustrated the many activities carried out by the Commission and future projects. Only this year 2019 the International Cartographic Conference (ICC) will be held in Tokyo, in July, a seminar in Clarens (South Africa) in September, a congress in Rio de Janeiro, in October,  and a conference in Vienna in November. 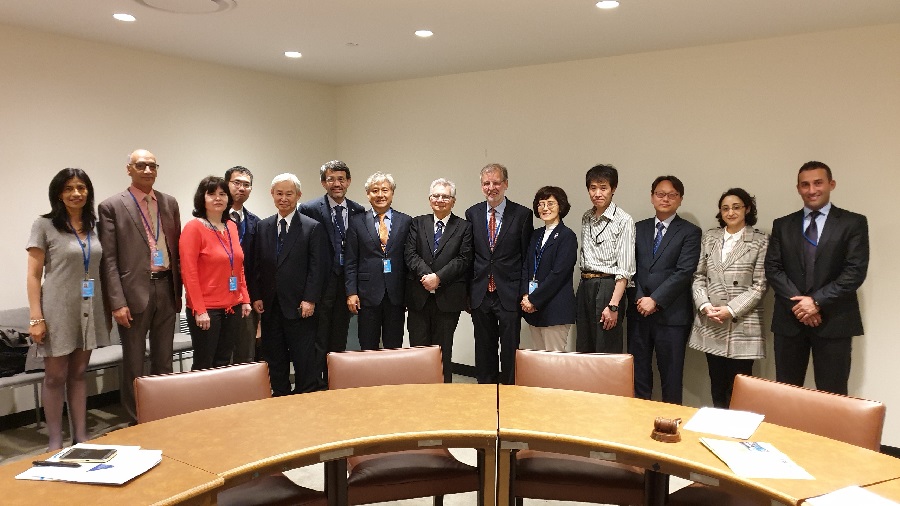 Kohei Watanabe, coordinator of the Working Group on Exonyms, presented the group’s activities:

“22nd (Business) meeting of the Exonyms WG
New York, UN-HQ 2 May 2019 8:15-9:30am
number of participants: 21
(Activities since the last business meeting (Aug 2017) were reported:)
1. The proceedings of the Prague meeting were published as a book (name
and place vol 7)
2. Report on the WG meeting in Riga, September 2018.
3. Proceedings from Riga is about to be submitted to the printers to be
published as a book (Name and Place vol.8).  It should be ready for
distribution by July 2019.  There is no funds for further book
publication (any source of money will be welcomed), but probably the
future proceedings papers can be made available on the web.
4. Announcement on the next WG meeting: (12-14 or 19-21) March 2020
Ljubljana.  Probably together with WG on terminology.
5. Website – addition of H. Sabbar’s book on Nubian names.  Decided to
make no distinction between “active” members and “corresponding” members
- all will be listed together without e-mail addresses.
If you have any materials on exonyms (e.g. gazetteer of exonyms)
please send URL or file to Matjaz.
6. Report of other activities of members on exonym: As presented in the
main meeting, Poland produced a new edition of their exonym list,
Finland produced a website on their exonyms.
7. Open discussion on accomplishment of the WG and questions still open:
Peter Jordan provided a summary, and pointed out topics such as:
1) exonym / endonym status of transboundary features
2) Adaptation of names to various languages (endonymoids)
3) Written or spoken exonyms (are exophones exonyms?)
4) Are phonetic transcriptions exonyms? (change of written form for
better expression of local pronunciation)
5) Donor supplied exonyms
6) Exonyms for features without endonyms
7) History and changes of exonyms
8) Does language / officiality matter? can exonyms exist within the same
language?
Other participants raised topics such as:
Examples of change of use from exonyms to endonyms (reduction of
exonyms)
Difficulties in implementing past resolutions on exonyms
It was pointed out that practitioners would prefer “practical” (e.g.
implementation of resolutions) rather than “theoretical” (e.g.
definition) topics.
9. Announcements on upcoming toponymy events:
15-20 July Tokyo,JP: International Cartographic Conference
3-5 Sep Baia Mare,RO: 5th International Conference on Onomastics
18-20 Sep Clarens,ZA: 5th International Symposium on Place Names
6-8 Nov Vienna, AT: Symposium “place names and migration”
Mar 2020, Ljubljana: Exonym and Terminology Joint Working group meeting”.

Andrea Cantile, coordinator of the Romano-Hellenic Division presented the work of the Division:

“The Romano-Hellenic Division (RHD) met in New York, on 1st May 2019, at 1:00 pm, at UN Headquarter, in the Conference Room 2. Participants were the distinguished representatives of: Belgium, Mr. Jean-Yves Pirlot; Canada, Mme Helen Kerfoot; Cyprus. Mr. Andreas Hadjiraftis; France, Mme Élizabeth Calvarin and Mr. Pierre Jaillard;  Italy, Mr. Andrea Cantile (Cahirman); Romania, Mme Monica Dumitrascu; Switzerland, Mr. Jean-Christophe Guélat; International Geographical Union, Mr. Cosimo Palagiano. For the meeting, the Representative of Greece, Mr. Charalampos Paraschou, was temporarily absent due to concurrent commitments. In consideration of this absence, the Chair of the RHD, Mr. Andrea Cantile, has previously consulted him on the matters on the agenda and had received full approval from him on all proposals.

Fig. 3. The Romano-Hellenic Division. The first one on the lower left, Mr. Pierre Jaillard, the new UNGEGN Chair.

The Chair welcomed the participants and opened the meeting by presenting the provisional agenda: 1 State of the art in the realization of the Proceedings of the Symposium held in Venezia in 2018; 2. Proposal for the next International Scientific Symposium of the Romano-Hellenic Division; 3. Organization of the Division bureau; 4. Other matters.

1 State of the art in the realization of the Proceedings of the Symposium held in Venezia in 2018.

Mr. Cantile informed the participants that the proceedings of the International Scientific Symposium held in Venezia in 2018 are still being prepared. The volume is edited by Helen Kerfoot and Andrea Cantile and it will be published next autumn by the Italian Geographic Military Institute in Firenze.

2. Proposal for the next International Scientific Symposium of the Romano-Hellenic Division.

Mr. Cantile for the next International Scientific Symposium of the RHD in September 2020, focusing the theme on “Permanence, replacement, transformation and oblivion of geographical names”, and involving all members of the Division, academics and scholars (linguists, geographers, historians, planners), cartographers and technicians involved in the collection and processing of toponymic data.

Mr. Cantile invited all the countries of the Division to evaluate the possibility of hosting the event and asked that they notify him via e-mail in the coming days of any such possibility. Mr. Hadjiraftis (Cyprus), on behalf of himself and others, expressed his deep appreciation for the organization of the previous symposia held in Firenze and Venezia and hoped that Italy can continue hosting the event in 2020.

Mme Kerfoot (Canada) observed that the two previous symposia were characterized by a large and productive participants of Italian academics and scholars and hoped that these meetings could continue in other large Italian cities, to further disseminate the importance of geographical names in the university field.

Mr. Cantile thanked RHD members for their appreciation and promised that he would verify the possibility of organizing the symposium in Italy, perhaps in Rome or Naples, and that he would then send an email to everyone with an update on this topic.

Mme Kerfoot also requested that the Chair communicate to UNGEGN Secretariat the address of the Division’s website and all news regarding the next symposium.

3. Organization of the Division bureau.

Mr. Cantile informed the participants that Italy is still available to maintain the presidency of the Division, through the service of Mr. Cantile himself, if the Representatives of other countries agree. Moreover, aver having consulted separately with the Representative of Greece, Mr. Charalampos Paraschou, and having obtained  his favourable opinion, Mr. Cantile proposed the election of Dr. Monica Dumitrascu (Romania) as Secretary of the RHD, to replace Mr. Ioannis Papaioannu (Greece) who has retired. Participants agreed by acclamation to the proposal for the Divisional bureau.

As there were no other items on the agenda the Chair declared the meeting closed at 1:15 pm”.

The next session of the UNGEGN will be held in New York from 3 to 7 May 2021.
Members of Arab countries have pointed out that the dates coincide with Ramadan and therefore go
changed. According to the Muslim calendar, Ramadan in the United States in 2021 runs from the evening of April 12th to the evening of May 11th, although they are small regional variations.

IGU Chair of the ICA-IGU Joint Commission on Toponymy